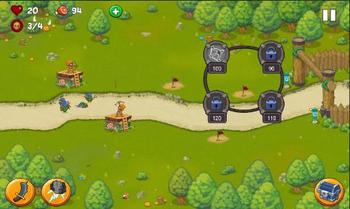 Though some may find it childish, there's more to tower games that you may have initially thought of. This outstanding game where you'll have to carefully allot your resources in building your towers, upgrading them and strategically placing them within your territory to avoid your enemies from reaching their goals, have become an incredible hit not only to kids, but to adults alike as they combine an exciting experience filled with action and the need for top strategical decisions. Regardless of whether you're a fan right from the get-go or not, as long as you're interested in finding out the best tower defense flash games today, then you're in luck as this is definitely the place to be.

Are you familiar of the setup where the valiant primates are pinned against their mortal enemies - the balloons, or in this case, Bloons? Bloons has been the topic of raves of players for its creative setup, but its predecessors have initially started with puzzle games. Still, the fact that it has successfully integrated itself in the Tower Defense world through its Bloons TD 5 game, just goes to show just how powerful the concept of this game is. This game will get you addicted to it through its compelling gameplay that will even allow you to choose levels and difficulties just how you please, giving you complete control at its finest.

There's no doubt that as gamers, we have all been suckers for games that are filled with fantasy-based ideas like treasures, dragons and more. The developers of Cursed Treasure knows this and they further amplify this through the development of the Cursed Treasure 2. Prevent your enemies from getting your treasures by building your defenses and upgrade them accordingly to bring down havoc to those who wish to render your clan's downfall in this amazing game. The game has been made challenging and ever more intriguing as it integrates more concepts of difficulty such as night-time defenses with low-visibility and more.

Many will surely agree that when it comes to tower defense flash games, the one that's certainly befitting of the crown is the Ironhide's Kingdom Rush Frontiers. Its predecessor, the Kingdom Rush, has undeniably been the King of TD games even back in the days and with this version created in 2013, it has successfully been innovated and integrated with more challenging and progressive levels that will require you to use your brains to the fullest to strategically manage your resources and defenses. This type of games are more than children's games and you'll surely know that once you try them.